And he was correct about that “interviewer”!

Google Play TOS: You Don’t Own What You Buy

Given the post I just did about the sea change at Google Books, I went looking for the new Terms of Service for Google Play and found something no one else has mentioned — at least that I’ve seen:

So what exactly is going on here?

If eBooks are going to be Cloud-based, with offline reading via an offline cache, then once Google’s contract for sale is up, your eBook — that you paid for — will disappear?

That’s how I read it.

Google needs to clarify this.

To me, a purchase is a purchase. You took my money in exchange for the goods and whether or not you still have a contract to sell those goods, if you are storing it for me and you are the only method for storing it, it should remain on your service.

Sixth Update, Tuesday March 13, 2012: According to a Commenter below, who spoke to Google via phone:

I received two follow-up emails as well, the last saying “Our engineering team has identified the problem and are working to resolve it quickly. While I cannot offer you an exact timeframe as to when it will be fixed, I will email you as soon as I have an update.”

It must be some catastrophic screw-up for it to take this long to fix. As of ~8:30AM EDST, I am getting Whale Fail when I am past the CAPTCHA for a PDF download. Since so many people are coming to this blog for this post, I am going to make a separate Sticky.

Just got off the phone with Google. They are aware of the issue and are working to fix it. And they confirmed that it is just an error — there are no plans to disable pdf downloads of public domain works. Good to know!

I hope that is true and it is fixed soon. This post has been gaining in popularity as others come across the problem. It seems I am the only one to post about it.

Fourth Update, Monday March 12, 2012: Google’s transition to Play has been a disaster for PDF downloads both at Play and at Google Books. Play seems to still offer PDF downloads — even the Help Center acknowledges PDF-formatted books cannot be read offline in a browser and must be downloaded! — but they are broken, just as in Google Books, with ~34K weird non-PDF files that download.

Third Update, Saturday March 10, 2012: Google Books is currently totally FUBARed. What I thought were PDF downloads turned out not to be. I didn’t check until a Commenter mentioned what he was getting. Let’s hope Google fixes this by next week. Or explains just what the hell is going on.

Second Update, Saturday March 10, 2012: This glitch hasn’t been totally resolved. Out of twenty books I’ve had on a shelf for downloading, only three worked. The rest got the Whale Fail message.

Update, Saturday March 10, 2012: Less than 24 hours later, PDF downloads work again. This might have been a temporary glitch due to the Google Play effort. However, I’m not embarrassed to be seen as absolutely wrong about this — because I want Google to understand that I am watching Google Books.

I’m waiting for someone at the near-dead Google Books Twitter account to reply (this might be a futile effort!) but right now what I’m experiencing at the public domain Google Books is not good. And I think I know Google well enough to make this post’s headline a flat statement and not a question.

END_OF_DOCUMENT_TOKEN_TO_BE_REPLACED

Free PDF Book About Google Plus 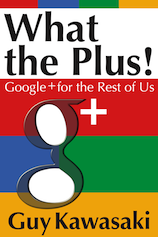 1987 was the last time I wrote a book about a product (The Macintosh Way). After using Google+ for a few months, I felt the need to write another product-oriented book. This book explains “what the plus” makes Google+ as special as Macintosh.

Once We Were Anarchists lyrics

Reasons Not To Be An Idiot lyrics

Raymond Chandler started writing in his early 40s after losing his job as an oil-industry executive during the great depression. His first novel The Big Sleep was published in 1939. He was 51.

And this from philosopher Mary Midgley cracks me up:

“I wrote no books until I was a good 50, and I’m jolly glad because I didn’t know what I thought before then.”

END_OF_DOCUMENT_TOKEN_TO_BE_REPLACED

Google-Asus Play Tablet Coming In May?

It’s DigiTimes, which everyone is parroting today, making it look as if it’s a done deal from multiple sources.

Aside from Google Play (I would be surprised if it wasn’t called the “Google Play tablet”), people have forgotten Google Plus.

But I’ve seen the TV ads for Google Plus. So I expect the ads for this tablet to highlight the capabilities of Plus too — especially the much-pimped Hangout feature.

After the break, video of what Asus showed at CES that might now be coming as the Google Play tablet.

END_OF_DOCUMENT_TOKEN_TO_BE_REPLACED

Filed under Android, Google, Other Hardware

Pirates Claim The Earth Is Not Flat

Why I Pirate – An Open Letter To Content Creators

The hypocritical Holier Than Thous will have a good Friday today, wailing and keening and sitting shiva over that post.

“We’re being bled to death,” they’ll scream as they check their bank accounts online to make sure their fat paychecks have been deposited electronically and on time so they can go have a fun weekend most of us can never imagine.

That is a long post. And it is one-hundred per cent true.

After the break, the key paragraphs that should have stood out with Blink tags for everyone.