And so yesterday I finally met the new iPad Air. And of course I had to go there:

That photo was taken at Best Buy. Whose WiFi was hinky, so the actual test was done at an Apple Store, where I didn’t take pictures or do any video but did send myself two screensnaps.

With iOS 7, the iPad has gotten even worse for dealing with Google Books PDFs.

The CAPTCHA screen gets scrambled if you zoom on that page at all.

And if the iPad Air is rotated while on that screen, this happens: 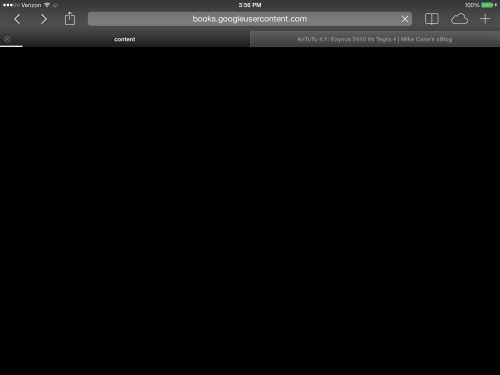 Apparently no one at Apple saw my prior post where I pointed out this problem. Or, you know, they did and just don’t give a shit. I lean towards the second hypothesis.

It never happened! The progress bar got about halfway and then POOF! Safari bounced me back to the Home Screen.

Unlike the iPad 4, it couldn’t even download the PDF!

I still wanted to know if there was any improvement in handling the Google Books PDFs — which I will yet again remind everyone are not regular PDFs, each page is a scanned image of the original book or magazine — so I downloaded Success: A Novel.

By that time, I was so disgusted that I didn’t bother to take a photo or do screensnaps. So you have just my report to go on.

It took five generations of the iPad to reach a point where Google Books PDFs — at least smaller ones — are handled to my satisfaction. It was the fastest handling I’ve yet seen on any device. iBooks now caches more than just three pages — it looked like perhaps ten pages. I could do fast flipping and even though I could outrun it and get blank pages, the page then appeared in less than a second. It was fast. It had snap.

Now if they’d just increase the damned RAM to 2GBs or somehow fix Safari so it could do large downloads, it’d almost be the device to get. (And yes, I do know I could get a dedicated PDF program and do downloads via that — but I must see the large PDF for myself to judge performance and there’s no sample downloads from iTunes allowed at an Apple Store — unlike freebie downloads on Android tablets from Google Play at Best Buy. Harumph.)

I say almost because of the lack of microSD card slot. Shuttling PDFs in and out of internal storage is not my idea of fun. Just think of how much internal storage will get fragmented doing that too.

And attention Apple fanboiz: I pressed the Home button twice and swiped away all “open” apps. There were maybe just ten in all. So there was nothing else there clogging the device when I did these tests.

As for the iPad Air itself, it’s a gorgeous piece of tech. Really less thick than the iPad 4 and the weight didn’t give me the wrist fatigue I’d get from the prior model. If they get the weight even lower in the next version, I’m convinced sales will tie with the smaller iPad Mini. I couldn’t help but think, looking at the iPad Air, that Jobs would have been very proud of it.