It’s time to get real.

Previously I’ve used Success: A Novel (catch up here) as my Google Books test PDF. Most mainstream devices can now do that. So it’s time to up the ante to the full Monty of what I need a device to do.

I wanted to use the same PDF but problems erupted. I had to use a different issue of The American Magazine. The one in those first two tests was 203MBs. The one in these tests is a whopping 290MBs. How’s that for going nuclear?

I will repeat this introduction on all four posts in this series since I doubt people will read all of them.

Now onto the iPad Mini.

This will be once of the shortest posts ever about Google books PDF testing!

I’m logged into my Google Books account. The file I want is under Recently Viewed. It’s the same as the one I used in the Nook HD+ test.

At the Gear in the right hand corner is a drop-down menu with Download PDF. I got that.

And here it is in the process of downloading: 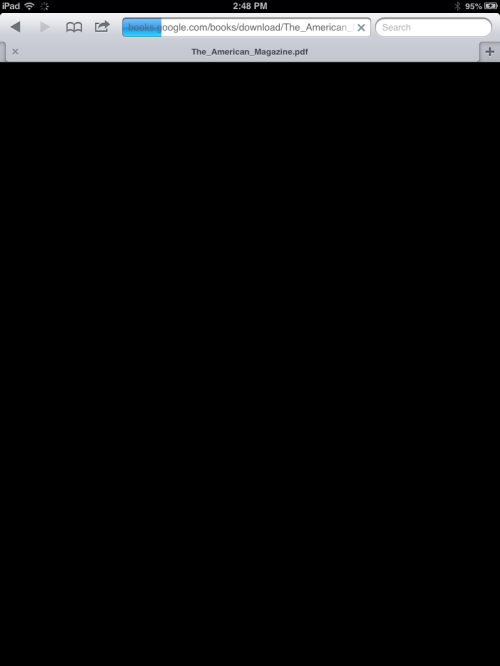 It got maybe 95% complete and then — POOF! The iPad Mini exited Safari and dumped me on the home screen!

PDF side of the shelf:

And WTF is that? you might ask. That ugly melange is what happens after you zoom into the Google Books CAPTCHA to download and then attempt a zoom-out once the download has started. The alternative view, seen in the first download attempt, is for the Safari screen to turn totally black!

Do you know what happened when the download finally completed?

Well, I wanted to see if this iPad Mini worked at all. I downloaded Success: A Novel and guess what?

So the iPad Mini can’t download or handle a 290MB PDF file? What kind of FAIL is that? If a crappy and slow Nook HD+ can download it and at least try to display it, what does that say?

To me it says that Android has a real chance to kick Apple’s ass just as Windows kicked Apple’s ass back in the day. Apple is already in deep shit and doesn’t even know it.

Really, this PDF test failure is just astonishing and inexcusable.

In the next post in this series, the iPad 4 with Retina Display. Do you think it will do any better?