The future is hollow. We should all kill ourselves now.

Theodore Twombly is going through a divorce. He’s employed, Cyrano-like, dictating letters for people who can’t express their emotions to the people they love or otherwise care about. 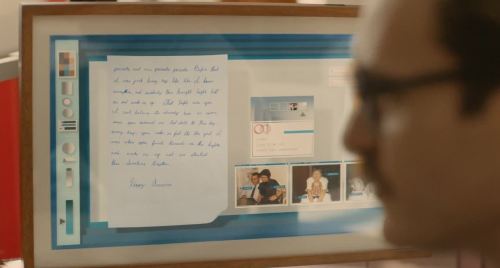 No shit. That will be a job in the future. At this place:

Do you want to slash your carotid yet?

This was — very wisely — mostly filmed with Shanghai, China as its exterior. Because the Chinese understand how to use architecture to crush the human spirit:

And I thought New York City could sometimes be bad. I am such a naif.

In this nightmare vision, people carry around little folders that are to be the evolution of our present iPhone and Nexus and Note:

These portable devices are primarily controlled by voice via an earpiece:

One day a new OS is released …

… that offers meatless sentience (sorry, Cohle from True Detective is still in my head…).

And from there we have a very annoying and very terrifying story of how a guy who can’t really connect with other human beings falls in love with a voice inside his head — without it being actual schizophrenia. Hmph. Technophrenia?

This is the second movie I’ve seen in a month that featured an artificial intelligence.

The first one — which I regret not posting about now — was Robot and Frank (which you should see ASAP).

The contrast between these two movies couldn’t be more stark.

In the first one, the person interacting with the AI never loses sight of his own humanity. He doesn’t get pushed around by the future steamrolling him or manipulated by a thing. He turns the thing to his advantage.

In this movie, the guy doesn’t seem to have any sense of himself — despite being very good at encapsulating emotions into words for his job — and is quickly wrapped around the virtual finger of something that doesn’t really exist outside of a voice synthesized and run by some complex algorithms residing on a server farm.

And he’s apparently not an isolated case. His neighbor also becomes wrapped up with her OS too, leading to a final scene that really can’t be anything more than a prelude to them jumping off the roof of a soul-destroying Chinese skyscraper to end their otherwise pointless and hollow existences:

And here I thought the biggest issue of the future was going to be trust.

It turns out that will secondary to identity.

People who are unable to step outside of themselves to see themselves, who can’t see the many strands that have been attached to them by and for the purposes of others, are going to create — and embrace! — the anti-human future depicted in this movie.

I don’t know which would be worse: The future of this movie or the one where we willingly go to be processed into Soylent Green.

5 responses to “Movie: Her”