Things seemed to have stalled over at XDA Developers.

If the Nook people are taking that as a sign of victory against the 3Vi7 haXXorz, I hope they wind up sleeping on the streets in cardboard boxes some day. Preventing people from modifying a device for full use is shameful. And Barnes & Noble can increase their damn eBooks sales any time just by dropping their mutant DRM. Punishing buyers is a fast way to go out of business. Mazel Tov with that.

This post will be about my latest one-hour(!) session with the Nook Glowlight Plus at a local Barnes & Noble last night.

I tried every damn trick I could think of to coax the Nook into going to a website. No joy. They’ve locked up that sucker [as I was still editing this post, I discovered new information I put in a separate post: Nook Glowlight Plus Has The Browser Trick!]. But I hope my own discoveries make for interesting reading for those thinking about the device.

First, I decided to call up the User Guide. Because I remembered it had links in it. I tried the links before and they didn’t work. But I figured maybe I missed a setting that could turn them on. No.

Second, I decided to be clever. Let’s grab a Nookbook that has links in it and try that. Maybe the links will be live in that, unlike the User Guide PDF. So I searched and found Internet Simplified. That was a bit exciting, actually. Because it was a Read In Store book. I could download the entire damn book. Dig the filesize: 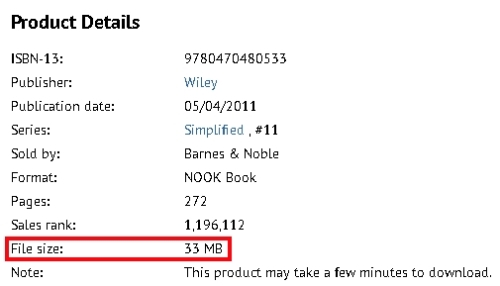 Do I have a knack for finding instruments of device torture or what?

The ending first: No, the links did not work in that either.

Trying to read that book was an experience that could best be described as miserable.

The Nook paused a lot. It grunted and groaned and strained and did its three-dots thing (its version of a beachball spinning) and I don’t see how anybody in their right frikkin mind would try to read a book that big on the Nook. I’d be able to turn a page. Then have to wait five to ten seconds before the Nook caught its breath before I could go to the next page. Then sometimes I could turn three pages in sequence with no problem. Then the Nook would have to sit and rest for several seconds.

Awful. Miserable. And inexcusable. Didn’t anyone who designed the Nook test it against the Nookbooks that are being sold?

It really made me wonder if after rooting the hardware would even work with SmartQ Reader to display even small Google Books PDFs. But, as I’ve shown, SmartQ Reader can make even low-end hardware look good. It’s the app.

One more thing about that book: When I popped out of the book — always by accident — my place was never saved. It’d return me to the damn cover to start the torment all over again!

After that disaster, I went back to the Nook main screen and it had a book recommendation for me(!): The Memoirs of Sherlock Holmes. I figured, why not? The filesize was promising: 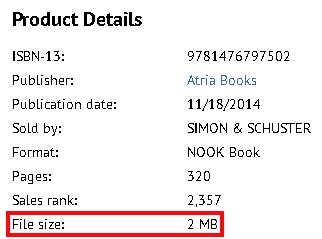 And right there on the second page, were two wonderful things:

1) An interactive button to sign up for a newsletter

Neither of which worked!

This now goes beyond my wanting to get to a website. This illustrates that no one at the Nook division is thinking. How can you prevent people from using what’s in a book like that? What the hell are Nookbooks supposed to be now? Basically like page-scanned PDFs? This is astounding.

The book itself worked well. I thumbed through almost all of it page-by-page and there were no pauses or stutters and — unlike David Rothman of Teleread — I didn’t find the page turn rate irritating.

What I did find irritating were the weird page breaks. Suddenly, there’d be a half or a third of a blank page and I thought the story was finished. But no, the next page continued it! This happened too many times. And sometimes the break would happen inside a paragraph! What the hell are they doing over there in Nookville with formatting? This wasn’t the first time I’d seen it in a Nookbook, either. But this time made me understand it wasn’t the fault of the publisher, some weird-ass shit was happening with Barnes & Noble’s Nookbooks.

In the User Guide [direct PDF link], they say: 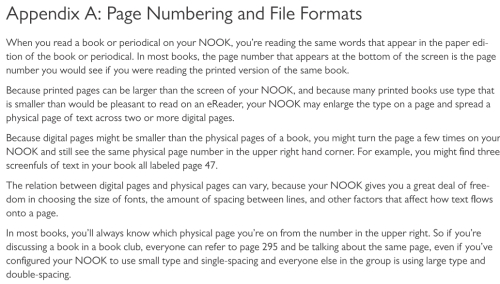 Apparently they’re trying to align physical book page numbering with ePage numbering. I found it damned confusing. Turning three pages but not seeing the page counter increment upward made me wonder if the software was defective. If that accounts for the weird-ass page breaks, it’s just stupid. If people want page-by-page physical book facsimiles, they should buy in PDF as scanned pages. No one should be confronted with the weird-ass page breaks I encountered.

Nate from The Digital Reader pointed out in a Comment that the User Guide does indeed mention Abode:

There is Adobe software somewhere in that sucker.

I confirmed this by using List Files. It takes a few seconds to display the files and then they appear in teeny-tiny type that’s not fully black and when you scroll you get this horrific eInk afterimaging and trying to keep track of where you’re in that list is absolute hell. But before I gave up in exasperation and eye exhaustion I found four listing for Adobe somethings in there, with “Adobe Digital Editions” in the directory entry.

So something is in there that should eventually make the Nook work with ADE. It’s just not turned on or not yet functioning properly. Another software update that should never have been needed. It should have worked out of the box and given people happiness.

As I was editing this post, I found that over at the Mobileread forums, they seem to have discovered the conflict that’s preventing Adobe from working:

And bc of that I’m not sure if it’s going to be easy/quick to have a fix for it: ADE needs to be updated on Adobe’s side … do you think they’re going to do it just for the sake of one device ?

Alternatively the B&N might update their NGP software to allow choosing between MTP and USB Mass Storage, same as some phones do … that will allow us to go back to the way things used to be. IMHO that’s the quickest way to have a fix in the market.

Well, maybe there’s hope on that front after all.

I managed to crash two Nooks. I was in the Store and in the drop-down menu tapped on Store Settings. This gave me a screen that was mainly black! Then I couldn’t back out of it. And after hitting the N button, I could get the main screen but choosing Store dropped me right back into that mostly-black screen! I don’t know why this happened. Maybe it has to do with these being demo models?

Anyway, I decided to totally reset one of the Nooks by pressing the Power button for ten seconds, releasing, then again for two seconds. That brought everything back but connecting to WiFi again was very, very, very slow. Again, that could be due to demo models.

I was also hoping to find some way to invoke Recovery Mode so with one Nook I held the Power button for twenty seconds and then did things like tap the screen with one, then two, fingers and press the N button. No luck.

It just makes zero sense to me that a Nook would have to be returned to Barnes & Noble for some kind of software problem — say a bad Software Update (they happen!) — that bricks the device and that a tech would have to open it to turn on Recovery Mode. That’s nuts. There has to be a way that I hope the wizards at XDA Developers will discover.

Or someone at Barnes & Noble’s tech support division will leak the secret. Hint hint hint.

Sharing on this device is limited to Facebook. And this is the icon: 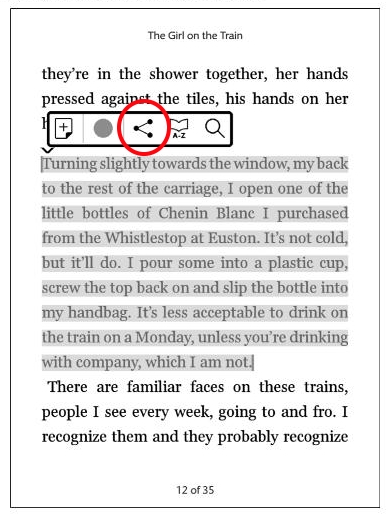 It was grayed-out on the demo Nooks. I thought the software was defective but I now understand they don’t link the demo Nooks to any Facebook account.

Well, that made me turn to the original model of the Glowlight, to try the browser trick. And what I found was that Social was grayed-out entirely. I don’t know if that’s due to it being a demo model or if they took that option away with an update.

But at least I looked at the first Glowlight again. And reconfirmed my original impression from its introduction that it was to be avoided. The new Plus model is nicer in all respects.

So, that’s all for now. We wait for XDA Developers. And current Glowlight Plus owners wait for Barnes & Noble to kick out that Adobe update.

One more thing: I found a way to see how a Google Books PDF will look on a 300ppi eInk display. Use a damn Kindle! It has that Experimental Browser:

All I need to do is see the screensnaps in this post for an idea.