Bed Bugs: Creatures that mess with your perfect code while you sleep so that the next day your program no longer works properly.

@mikecane My observations are meant to protect us from wrongly blaming ourselves for so-called human error.

He is already famous for Reeze’s Law: Typos are created spontaneously and without human intervention whenever you hit the Post, Publish, Submit, or Send button. I have had lots of experience encountering that one!

eBookNewser made me do a double-take today with this post: ‘True Grit’ Coming To Kindle 1/25

What? Sure enough, I go see Amazon’s Kindle listing today and it’s this: 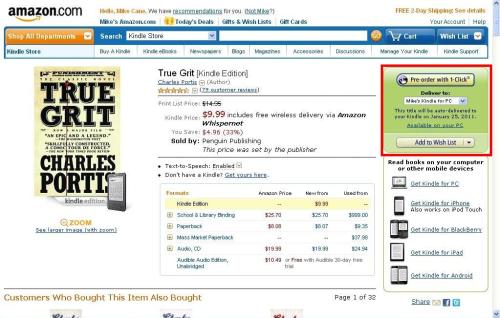 Look at that listing. You can’t even get a Sample of it.

Yet I did last week!

END_OF_DOCUMENT_TOKEN_TO_BE_REPLACED

Is The iPhone Coming To Sprint?

Sprint takes step to ensure customers continue to enjoy unlimited data while on the Sprint Network, without overages

Sprint will increase its postpaid rates by applying a $10 per month Premium Data add-on charge to activations of smartphones beginning Jan. 30.

What’s troubling about this:

1) I wonder if this is paving the way for the iPhone at Sprint?

2) Will this apply to tablets too?

Whatever the reason, with this timing, they’re really screwing the pooch.

Writers: Save Your Ad Money!

Have you ever bought a Facebook ad? I have. I have talked to many, many people who have. We have spent hundreds, many have spent thousands or even more, experimenting with Facebook ads. They are worthless. Nobody ever looks at them, and nobody ever clicks on them. I just talked to someone who was trying to promote a book. He found it cost him over $100 in ads to sell one book. Moreover, as you increase your ad spending, people get used to the ads and just ignore them. So, your already low click-through rate plummets even further.

That writer would have been better off spending less money to sponsor Kindle Nation Daily for one day and probably would have earned back that money the same day too. (They are apparently working on a Nook Nation Daily too, by the way. And, as usual, I have no connection to these.)

Thanks to the always-sharp Maud Newton for that via Twitter.

We Didn’t Stop The Fire.

Your creations aren’t mass-produced items, like a car or air conditioner or even PC. They are one-time things. There’s no, “Oh, I’ll just make another” if someone wrecks it.

I covered that back in April 2010: How Steve Jobs Saved The World In A Single Picture

There was no magical tablet prior to the iPad. No prototype that even came close to what the iPad does. It’s time for you lot to accept the fact Steve Jobs and Apple were the first to get it right and move on.